I can’t remember fully the story about the origin of Japanese candle sticks, can’t even remember if I read it from a book or from a blog of some famous trader. But the summary of the story goes like this.

There’s this Japanese guy who become so good at trading commodities because he records the highest point, the lowest point, opening and closing price of the commodities that he is trading.  Later on he learned that he could make a drawing out of it which is now the candle stick. He’s so good with trading because he understood the psychology of the market by the use of the candle stick formations.

In this part 3 of technical analysis for beginners our aim is to know how to read the candle stick formations. We will be using the DAILY TIME FRAME in our examples because I believe that the daily candles are more accurate in portraying the psychology of traders.


Let’s begin with the parts of the Japanese candle sticks


A candle is composed of a body that’s for sure and sometimes with an upper tail and/or lower tail.


See the image below for reference.

It’s parts are pretty basic and self-explanatory that’s why we move on and see some examples of its formations and understand the message that it brings. 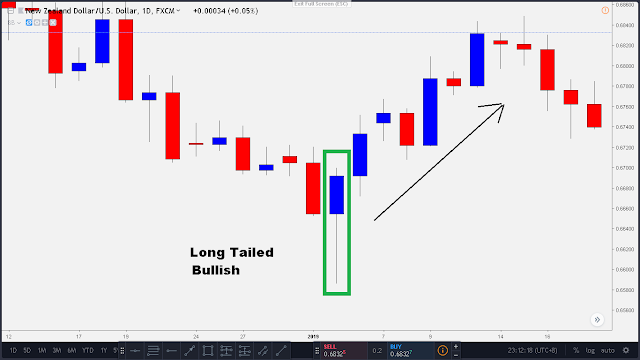 
That candle enclosed with green rectangle is our first candle to be explained.  To tell you the truth I don’t know what this candle specifically called but the important things is knowing the meaning behind it.


Noticed that the lower tail of the candle is longer than the body itself. This candle brings the message that the price has a big probability of going up which it did. Having this long tail simply shows that there are more buyers in the market. 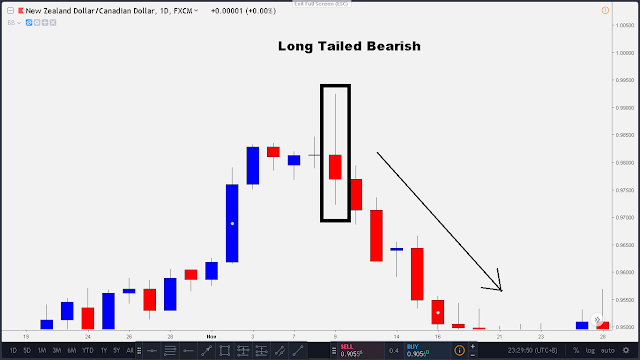 The candle above enclosed with rectangle has the same meaning with the first candle that I have explained. It’s just that this candle signifies that the price would probably go down.


This candle stick pattern is actually just similar to that of the first two candles that I’ve shown but has a much smaller body.

There are so many traders out there who complicate their lives and made some other names for it like, hammer, shooting star, sword and etc. To avoid confusion of names if a candle looks like this as shown below let’s call it a pin bar.

This two candles enclosed in a rectangle is called a pin bar. Its body is relatively small and its tail is very long.  Long tail formed because price initially moved in that direction but was rejected. If we see a long tailed pin bar like this then that only indicates that there's a big chance that the price would go up.

As you can see, its very clear what these bearish pin bar's message is. It shows that in that particular days the sellers dominated the market and created a strong sell down.

This candle stick formation will serve as a catalyst for price direction in short term or long term.

Doji, the candle in the middle


Basically the doji candle is a plus sign. It has an equilibrium formation of buyers and sellers. If this candle stick form, it usually means that the current trend is ending and a new trend is approaching.

Doji is a trend reversal candle.

Its that time in the market when the dominating movement of the market just halted and exhausted.

As you can see in the example above, it just shows that the trend had just arrived at its peak and instantly reversed.

Another example above of a Doji candle formation which acted as a catalyst for price reversal.

We are done with the single candle formations, now lets go to the combination of these candles and lets try to understand its psychology behind.


The above image is an example of what an inside bar candle looks like.

An inside bar is basically a candle which is formed inside the previous candle. Inside bar formations indicates indecisiveness also in the market.

The big candle is what they called the mother candle and the small one is its child.

Something to note here. In the above image you can only see 1 child/inside candle but there are times that inside bar candles can be as much as 3 candles. The more the candle inside, the more the strong the momentum when its price broke the mother candle.

How do we trade the inside bar set up?


Trading the inside bar candle is quite tricky.

Usually traders trade this set up when the prices broke out the mother candle but sometimes this is where the fake movement happens.

As you can see in the image above a bearish pin bar was formed. Intraday, the price broke to the upside and looks bullish, many traders thought it was going up but it was a trap. Eventually the price came back inside the mother candle and formed this bearish pin bar set up.

To me this is the best time to trade inside bar candles. The market made a false move and after that it shows its real intention. Lets take a look at another example below.

Noticed here that there are 2 child candles inside the mother candle formed before the appearance of the false breakout. This to me indicates a strong momentum to whichever side it decides to go.

The false breakout formed and buyers saw this set up and made the price very bullish.

If we have inside bars we also have outside bars which is commonly called ENGULFING CANDLES.


Engulfing candles are candles who engulfs/eat the previous day candle. This indicates rejection of price and when you combine these two candles it will somewhat form into a pin bar.

I find engulfing candles a very good set up in taking trades because it shows clearly the sudden shift of momentum between buyers and sellers.

How do we use the engulfing candles as a set up for a trade?

The above chart of AUDCHF forex pair shows 2 engulfing candles. Lets try to see where should we entered the trade and its risk to reward ratio.

We could have entered right away a short trade after the second engulfing candle formed. The stop loss placement should be above it with a 3 to 5 pips allowance for the spread.

Looking at the price action we can automatically conclude where our profit target should be located. It should be in the previous support of 0.74180 as indicated with the horizontal blue line.

What happened after we took our entry? The market just did its thing and moved towards the direction of our profit target. After 8 days of waiting our profit target was finally triggered and bagged 1:4 risk to reward ratio.

Take time in studying charts and you will see this set ups forming over and over again. The part 4 of this article series will be about head and shoulder pattern. Stay tuned..

Ciao and till next time again!