I know you will agree with me when I say that we are living in the age of information or should I say the Internet Era. Where information is very accessible anywhere you go with just a click of a button.

In this age whatever we want to learn we can learn; but because there’s so much information out there, so much option to choose from we tend to hop from one subject to another without even learning thoroughly yet the first subject that we have chosen. What I wanted to imply here is that we become jacks of all trades and we all know this comes with this figure of speech.

“Jack of all trades, master of none.”

I want to talk about this and apply it to forex trading and mainly focus on the candle stick formations.

So why do we need to master and focus on certain Japanese candle stick formations?


The answer to that is because candle stick formations serves as an indicator of the psychology of all the participating traders. It’s our clue of whether the BULLS or the BEARS won at that particular time frame.

Perhaps all of the traders, including me will only decide to take on a trade when a certain formation of candle stick patterns formed. This is called the trade set up candle or for me candles, which I will be sharing later on.  I hope you will put this in your mind, to trade only when your trade set up candle/s formed and don’t trade when it doesn’t. One big benefit you can get from following this is that you will somewhat avoid over trading which is one of the biggest mistake a beginner forex trader would do.

What are my trade set up candles and the logic behind it?


This candle set ups that I'm gonna show you is the skeletal system of my forex trading strategy. Without this specific formation no trades will happen for me. I wait and wait and wait patiently until this formation shows up. I’m like a soldier with two guns here, I have a machine gun and a sniper rifle but I choose to use the sniper rifle and target those big bosses which equals to the big moves in the market. I hope you get my point here. So here we go! 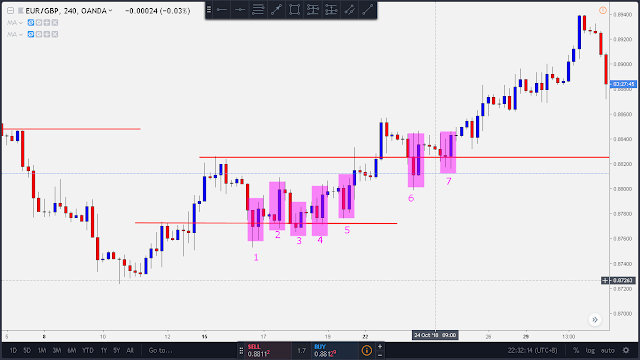 As you noticed in this example, EURGBP 4 hour time frame. Ive highlighted 7 engulfing candle formations here which to me signifies that the momentum here is bullish.

Why these? Why I wait for these candle formations to show up? Whats the significance of this?

Click to enlarge the image and you will see that based on this candle stick formations you will understand who dominates the market. Every bullish engulfing candles indicates that the buyers dominated or overpowered the sellers every time the price tries to go down. If these engulfing candles keep on showing up in the chart what does it indicates? What does it resonates? What does it tries to say to you? Its very obvious already, eventually the price would go up!

Another good thing about this kind of set up is that it gives you a lot of time and chances to ride it before it decides to go up.

In this case I could have had decided to join the trade after the 3rd engulfing occurred. Then a 4th engulfing shows up, another opportunity to those who are late and a 5th shows up another one for the late commers. Mind you this is in the 4 hour time frame. So each candle here is equivalent to 4 hours, if you are just trading part time there's no reason you could not join this trade.

Traders with the same strategy could chose to ride this trade with the pullback which is the 6th and 7th engulfing, for me its still a valid signal or set up.

Lets take a look at another forex pair as an example. 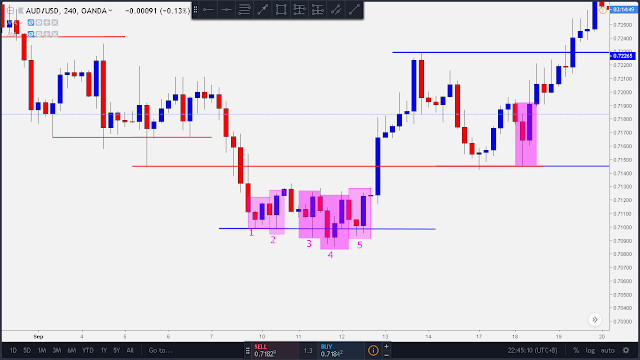 This is in the AUDUSD pair. The best time to join this trade would be the formation of either the number 4 or number 5 engulfing candles.

In this case here, the 4th engulfing candle is a 3 candle combination in which when you add up the last two candles it would end up engulfing the first one. I hope you grasp what I'm trying to say here, its just basic actually.

We already defined what is an engulfing candle, now we need to define what is a pin bar candle since we need to understand it for this set up.

A pin bar is a candle which has a short body and long wick or tail. Its very easy to recognize because it looked like a pin.

Pin bar formation means price rejection in the market, sometimes it indicates reversals of momentum. It has the same logic behind engulfing candles it just that pin bars are quiet more obvious to notice, especially the long tailed once.

Lets take this example below: 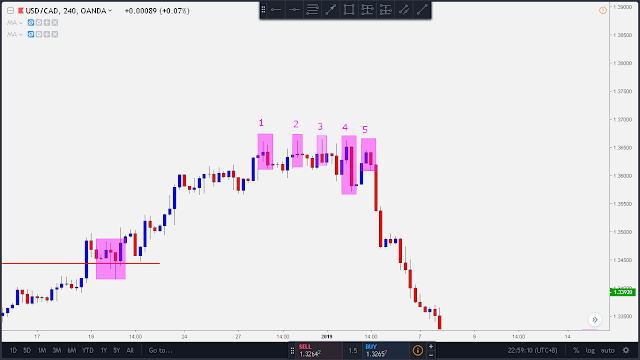 This set up formed in the USD/CAD forex pair in the 4 hour time frame. Actually, I was able to bank 1:4 risk to reward ratio with this set up and I made a live recording here in my YouTube Channel. Click here if you want to see the live trade and don't forget to subscribe :)

If the engulfing candle formation is already a powerful set up, how much more when you combined it with the pin bar?

Is it a 100% percent guaranteed that this set up will work? Of course not, but you can have my word that the win rate of this set up is more than 70%.

After the 4th signal formed which is the engulfing candle, I waited for a pull back before I took my entry. As you can see it formed yet again another engulfing candle which is labeled 5, before the price moved bearish and never looked back. This is what I love about having this FOREX STRATEGY IN THE 4 HOUR TIME FRAME, it gives you so much time to see this opportunity for an entry before it manifests.

I'll show you again another example of this candle stick formation set up in the 4 hour time frame. 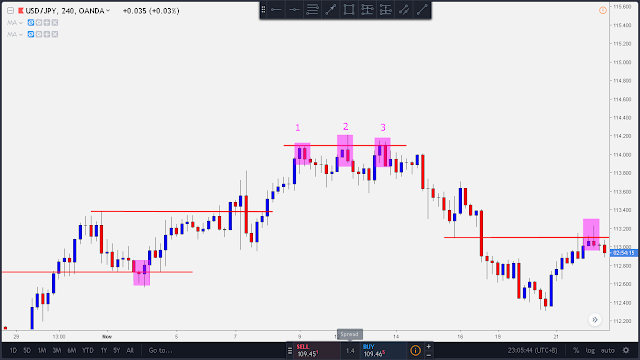 Formed in the USDJPY 4 hour time frame. This time its just 3 signals, but still leads to the same result; price movement reacted to the combination signal and became bearish. Here its all bearish engulfing candles with number 2 being an engulfing at the same time looks like a pin bar because of the rejection tail. There are so many set ups like this in the market and its very easy to recognize also. In this kind of set up I set my risk to reward ratio to 1:3, depends really on the price structure. Safest place for the stop loss would be above the engulfing candles.

That's it! These are the only Japanese candle stick formation that I always looked for in the market. I only trade this kind of set up. If they don't show up then I wait. Out of the 27 forex pairs that I monitor I could say that at least once a week a set up like this comes out.


In trading the currency market you need to create rules of engagement, and not just blindly taking trades without logic behind. That is the main thought of this article. If you are really serious of becoming a successful forex trader you must learn how to think like the 10% and be disciplined always on taking trades. Be like a sniper and take only trades with high probability of winning.

If you think my set up looks good, looks profitable then feel free to use it :)

If you have some questions in your mind comment below and I will try to answer them ASAP.

See you soon my friends!