Let us define what is support and resistance.

It usually forms in two ways, one is in a horizontal formation and other is in a trend formation.

What is the difference between the two?

Horizontal support and resistance forms in horizontal sideways motion. It looked like a consolidating market as what we have discussed in the part one of this article series. 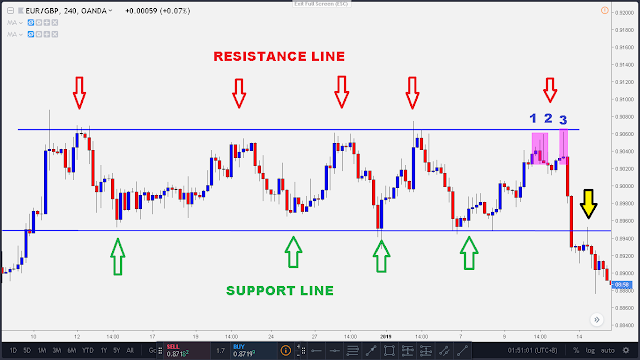 As we can see in the image above, we can say that it’s a valid horizontal support and resistance when the price line is tested at least 3 times.

Take note here that once a support or resistance is broken, it will act the opposite way. Like for example in the pair above. The support line was broken and price closed below it. What happened when the price tried to go up? The broken support now acted as a resistance and now starts rejecting price from going up as indicated in a yellow arrow the candle formed a bearish pin bar. 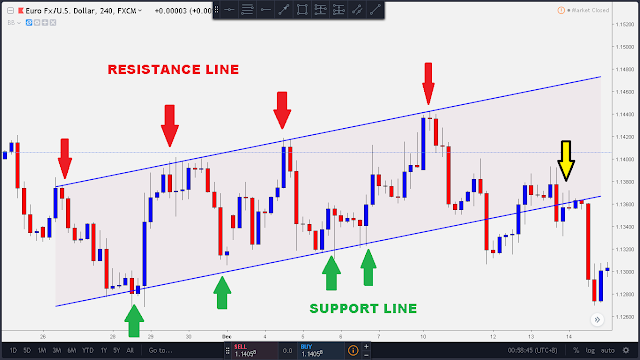 As we can see in the image above, the support and resistance formed in an up rending fashion. Again we can be sure about its validity when its lines are tested at least thrice.

Another thing to notice here also is that when the price broke the support line and closed below it, that support will now eventually act as a resistance as indicated in a yellow arrow a bearish pin bar was formed. Same will happen also if the resistance is broken and the price closed above it, it will then act as a support.

How to use support and resistance as a set up for an entry point?

Many strategies could be generated by using the support and resistance. The most common strategy that I know would be is taking an entry at the retest once the support or the resistance is broken. The set up would look like the one that I’ve labeled on a yellow arrow. A pin bar or an engulfing candle formed in the retest is good enough confirmation for an entry. 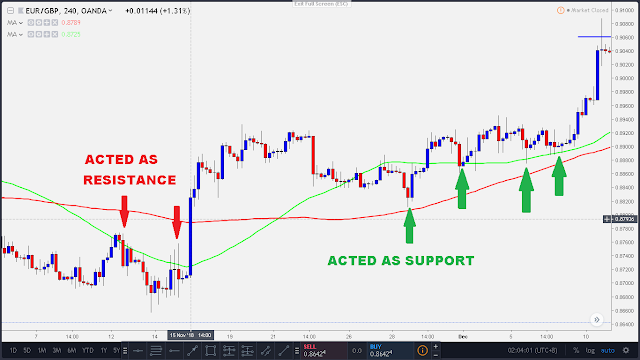 Successful price action trader is good at plotting support and resistance. It may seem hard for a novice trader to see these patterns in the start but with constant market exposure and practice all becomes a piece of cake.

Take a look at your chart and try to see if you can identify and plot any of this support and resistance.

In my next article which is the part 3 of this series, I will talk about the basic Japanese candle stick formation and the psychology behind its formations.

“Tell me and I forget. Teach me and I remember. Involve me and I learn.” – Benjamin Franklin

Until next time, see you in part 3!